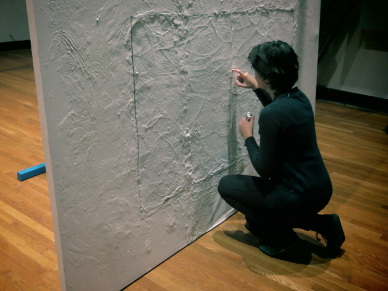 Sara Cubarsi is a violinist performer-composer, experimenting with fine tuning, specially interested in its relation to fragility, affect, resonance and vital materialism. Her work is usually in just intonation and uses scordatura, as well as sine-waves, sheep bells and interactive visual works. Inspired by the work of Jane Bennett and Joseph Beuys, her Exvot series is an example of her work-in-progress with processes of resonance, where the musical performance is in dialogue with material assemblages, most often involving melting wax paintings. From 2015 to 2018, Sara studied composition with Wolfgang von Schweinitz and Michael Pisaro at the California Institute of the Arts in the performer-composer doctoral program. Using the Helmholtz-Ellis Extended Just Intonation notation, her doctoral project proposes a precise way to tune each note of Bach’s solo violin sonatas n. 2 and n. 3 in 5-limit JI with a different tuning of the open strings than the common pure-fifths tuning or tempered narrow-fifths tuning, together with an optimized modified sixth-comma meantone notation for the Grave BWV 1003. Sara also performs on baroque violin and has an ongoing collaboration with Marc Sabat, preparing Sabat’s intonation realizations of Bachâs solo Sonatas in 7-limit JI with an additional supporting second violin part. She currently spends most of her time tuning her violin in Cologne and practicing for projects with Ensemble Musikfabrik.

Concerto for a Painting in Pythagorean intonation (2016) • video